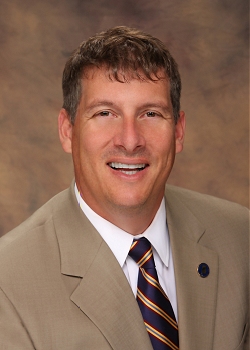 Barry E. Robertson was sworn in as Calhoun County’s Commissioner of Licenses on January 2, 1995 and was re-elected in 1998.  Prior to being License Commissioner, he served as a member of Governor Jim Folsom’s Cabinet as the Governor’s Legislative Liaison to the Alabama State Senate. From 1992 to 1993; Barry served as Chief of Staff/Administrative Assistant to the Lieutenant Governor of Alabama. Prior to his service in Montgomery, Barry was employed with the East Alabama Regional Planning and Development Commission.

Barry was born in Fort Eustis, Virginia, and is a life long resident of Calhoun County. A graduate of Jacksonville High School, he received his Bachelor’s degree in Political Science from Jacksonville State University in 1989 and a Masters degree in Political Science from JSU in 1991. Barry and has a daughter, Anna-Kate, and a son Parker. They attend Anniston First United Methodist Church and Church of the Highlands.